Sylvia Schwartz plays on Opus 930, a baroque violin patterned after the ‘Goldberg’ violin of Joseph Guarneri “del Gesú”. From the beginning of our relationship, Sylvia has shown a great deal of ingenuity and ambition, putting together a successful crowd-funding campaign to help purchase her instrument and embracing many of the new ways of engaging with audiences that technology is bringing us, including Groupmuse, a website that facilitates chamber music house concerts, and Patreon, a web-based patronage subscription system. She performs with her partner, John Ott, as Guts Baroque. You can support their Patreon here.

In the interview, we talked extensively about the work of Émile Jacques Dalcroze, a Swiss composer and music educator who developed an influential pedagogy known as eurhythmics in the early 20th century. If you are interested in learning more about this, The Dalcroze Society of America is a good place to start. This interview was conducted by Brendan Taaffe. 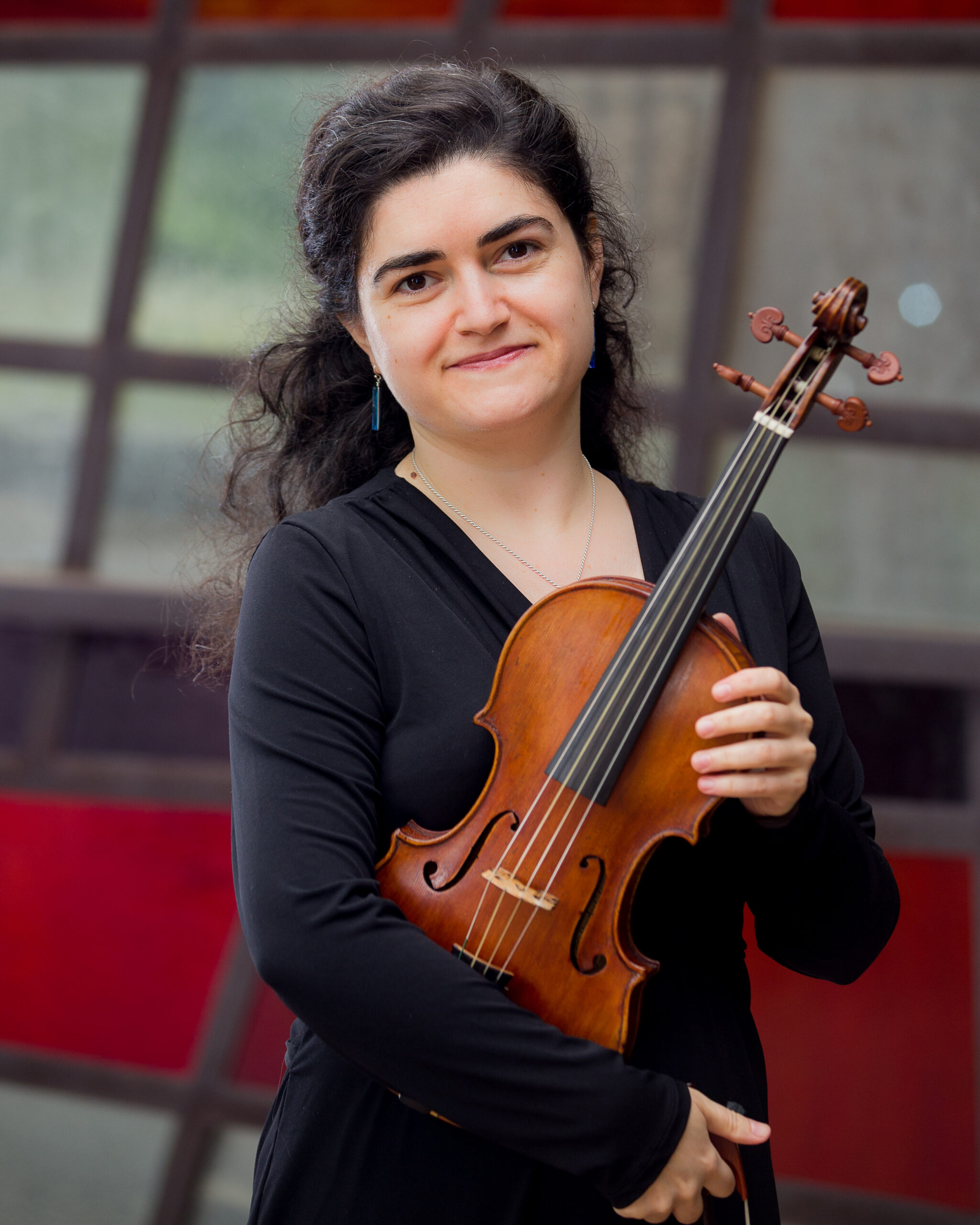 I’m curious to hear about what drew you to early music, and how you’ve been able to make a living as an early musician. With fewer robust career options available than there are for modern orchestral musicians, it seems like you have needed to be creative. Can we start there?

Sure. It’s definitely a work in progress, but one of the things that drew me to early music was the people. The first thing that piqued my interest when I was at Longy [School of Music of Bard College] was actually stage managing for the International Baroque Institute there one summer. Talking with people backstage, one of the visiting faculty turned to me and said, “You seem like a nice person. You should try playing baroque violin. I think you would like it.” The energy everybody has and the delight in making music was really compelling. There’s such a collaborative nature to the music itself that I find—and I don’t know if it’s the chicken or the egg here—that the kinds of people who have chosen to do this are just so approachable and so full of the joy of making music. That’s part of what drew me to it.

I started off with chamber music, and that’s a world where you make your own opportunities. Our (Guts Baroque: ed) primary performances since graduating have all been chamber music, so that’s meant taking the music out of traditional concert venues and learning how to self-produce shows. Right before the pandemic hit, I did start playing with the baroque orchestra in Long Beach, California, Musica Angelica, which is a more traditional, union-scale orchestra gig. It’s different for early musicians because there are not as many of those orchestras. It’s not like you’re going to be in a city and you’re going to have weekly concerts with a baroque orchestra and it’s going to pay your salary and you’re done. A lot of people make it work by traveling around to play in these different orchestras. For me, personality wise, I’m really drawn to being part of the fabric of a local community or a region, so that’s what I’m hoping to do with my chamber ensemble. Now that we’re in New England, where there’s such a density of smaller towns and interested people, we can travel around and do that.

What are those alternate venues that you mentioned?

We had a really fun concert in a brewery in Brunswick, Maine. We’ve done several groupmuses, both online and in person, and those have been really fun. My partner John has a tradition of throwing a chamber music party for all his musician friends on his birthday. Everybody comes over and has a great time and reads string quartets. And at one in the morning, everybody is playing the Bach double concerto really loud. I feel so lucky that I get to have that proximity all the time, which is something that people aren’t used to with classical music. That’s something I love about the groupmuses. We’re in somebody’s living room, or in their beautiful garden, and there all these people around and they have their wine and their cheese and they get to commune with the music and with each other, which feels so far away right now.

It’s really hard for me to code switch. My bachelor’s degree is in engineering. I went to Olin College, which places a really high emphasis on entrepreneurship and opportunity assessment and stuff like that, so I feel like I’m well equipped to do all the stuff I’ve done in the past year, like learning how to write press releases and publicity, and then, because of the pandemic, learning how to become a recording engineer and a video engineer and doing extra web design and all that. It’s not hard for me to do that work, but it can be really hard to step away and practice, to put the work into the craft. Because you have to have people come to the concert, and the concert has to be good. I think it will probably be a perpetual balancing act. Each thing by itself is a full-time job. And each thing by itself is fine, but the code switching is really hard. From a practical standpoint, teaching certainly plays a substantial role in my income stream. And in the past year, I’ve been really focused on building up our Patreon, trying to get enough of a supporter base that we can keep paying the rent.

Have you created any structures to help you do that?

Time-blocking is really helpful. If I do the music stuff first, it puts me in a better mood to do everything else. And from a practical standpoint, we’re living in a shared building now, so if I practice during the day, it’s easier for my neighbors than if I practice at night. I continually remind myself that no matter how good your publicity is, the quality of the music you’re putting forth is ultimately the most important thing, I also keep reminding myself that it doesn’t have to be perfect. 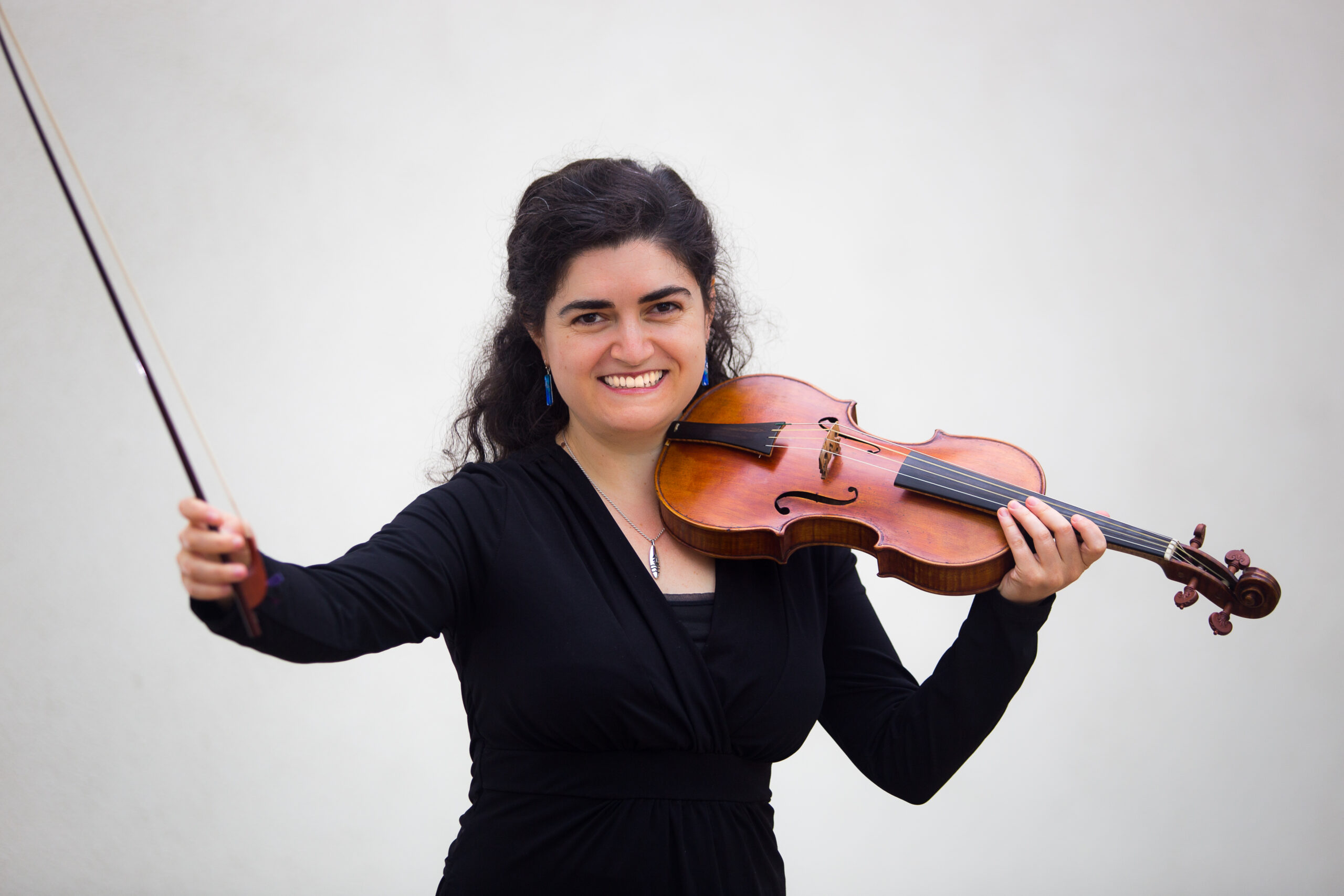 I saw in your bio that your pedagogy is Dalcroze-based. My familiarity with that technique is shallow, but what I know of it is that it is group- and piano-based. Is that right?

Yes. Traditionally the teacher is teaching from the piano, playing improvisations that are the support and the instruction for how the students are moving and experiencing whatever the rhythm topic is. The instructions are coming from the music, so they’re learning to listen really closely and to make quick adjustments in what they’re doing based on what they’re hearing. Even though I am not a pianist by any means, I did learn piano improvisation in my training program. The teachers were wonderful at giving me really simple tools that I could be really expressive with, and they also believed in expanding beyond the pianist world to use the strengths of other instruments. They were coaching me equal time on piano and on violin. They liked the fact that I don’t have to be at the piano: I can be among the students as they’re skipping and walking around the room. That overcomes one of the traditional barriers in Dalcroze, which is that as soon as the teacher leaves the group of children to be behind the piano, the energy goes down.

The way that Dalcroze explores the relationship between time, space, and energy is so well suited for string pedagogy in how we use the bow. Because you can see it: the same way that you have to adjust your stride, say if you’re trying to step fast eight notes versus half notes, the way that you direct the weight of your body is similar to how you use your arm and how you direct the weight of the bow. It’s harder for singers and wind players because you can’t see the air stream, but it’s so helpful in the context of lessons. When I teach rhythm, I have my students sing, I have them physicalize rhythms and meters that are tricky. My violin pedagogy is Suzuki-based. I was a Suzuki kid and have done the teacher training. Suzuki and Dalcroze work together really well.

Part of the magic of it is this: Emily Jacques-Dalcroze wrote that joy is a really important part of learning. If you’re experiencing joy, you’re much more open to learning and assimilating new information. So the interactions in a Dalcroze class between the students are really important. And with teaching kids, I think there’s an important ingredient of silliness.

How does it incorporate into your own playing in your duo or other chamber ensembles?

As impactful as my training was for me as a teacher, it was ten or twenty times as impactful for me as a player. I was a dancer before I was a violinist. When I stumbled across this method, it was so easy for me to understand it in an intuitive way and to tap into what my body already understands about movement and about embodying music. My study of Dalcroze has really helped me deepen and refine my understanding of that, and to tap into it when I have my instrument in my hands. When I’m playing, sometimes I’m wanting to dance the music and show what’s happening, which interferes with the physics of playing my instrument. Luckily, there’s this other core Dalcroze idea of doing a movement and then inhibiting the movement to internalize the concept. So, having an idea of how I would move, but then standing very still and then allowing that energy to come out through my bow. That’s when the concept really translates out to the audience.

I discovered Dalcroze right before I discovered historical performance. So many times when I was studying Dalcroze and historical performance at the same time, I was so excited about how helpful they are to each other. Pre-conservatory, I was not very strong with rhythm or note reading. My solfege education really helped me be more anchored and empowered in what I was doing, giving me lots of tools.

Studying Dalcroze changed my life as a musician. Part of it was the community, but at the core, the fact that this music is so connected to dance and to human movement and to the expression of emotion through human movement made me say, “Yes! I’m home.”