There are two approaches to making instruments. The first approach is where you decide there is one right way to build a violin, and then you have to use the wood that works with the way that you want to make it. The other approach is where you understand how things need to work together, which allows you to use a wide range of wood as long as you adjust the way in which you’re making that particular instrument to that wood. The latter is my approach, in part because it’s more fun, and in part because I seem to get better results that way. 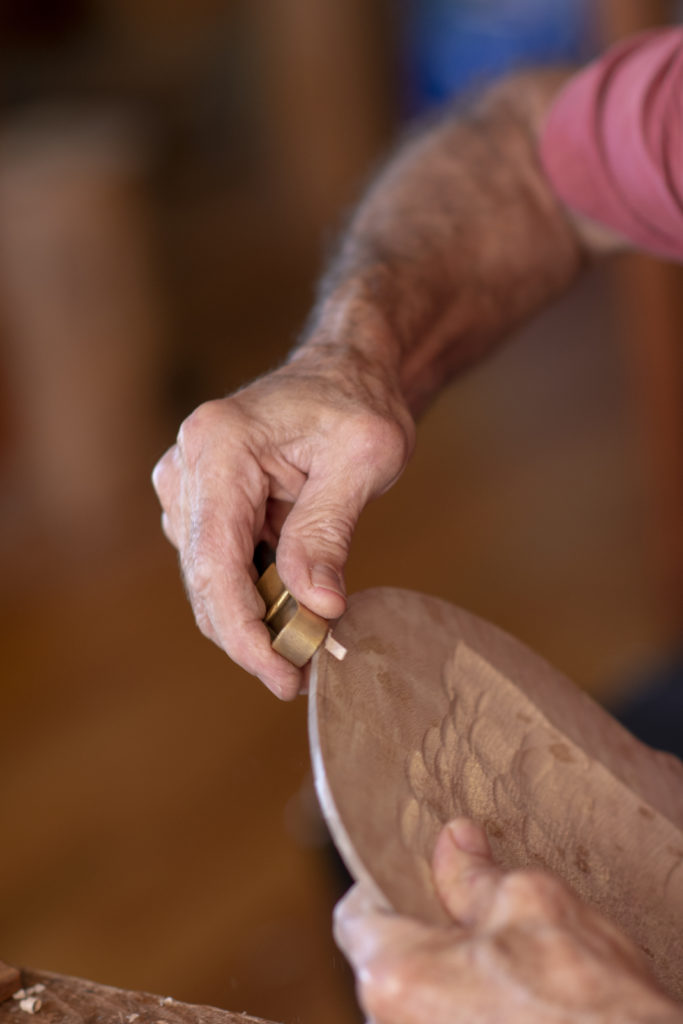 By necessity, young makers are taught to follow the first approach. We were taught that there is one right way to build an instrument, shown the way that it’s supposed to be done and asked to imitate it exactly. As students, we worked with what we were given; we didn’t select the wood. We weren’t taught at all about how to compensate for different woods, which would come at a later stage of my development as a maker. This is a very logical way to teach, beginning with, “This is what a violin should be.”

In the beginning, I followed these rules, too, but over time, I broke out of that mindset and learned to intuitively figure out how the components of the instrument work together.

Spending ten years doing restoration and repair work in Brad Taylor’s shop made it clear to me that a lot of the instruments that professionals are using don’t fit the rules that I was taught. A violin comes out good not because a couple of steps were done in a particular way, but because all of the steps harmonize with each other. All things have to balance. Everything in the violin is affected by everything else.

Doing repair and restoration, you have many different instruments in your hands, made by many different makers, arriving in various states of preservation, having been reworked and adjusted by other people in many different ways. I could tell that there must be some deeper process beyond “the rules” that results in a good violin. Turns out it isn’t that you have twenty different individual characteristics that must each be done in a certain way. You can make variations in any or all of them long as they all work together. 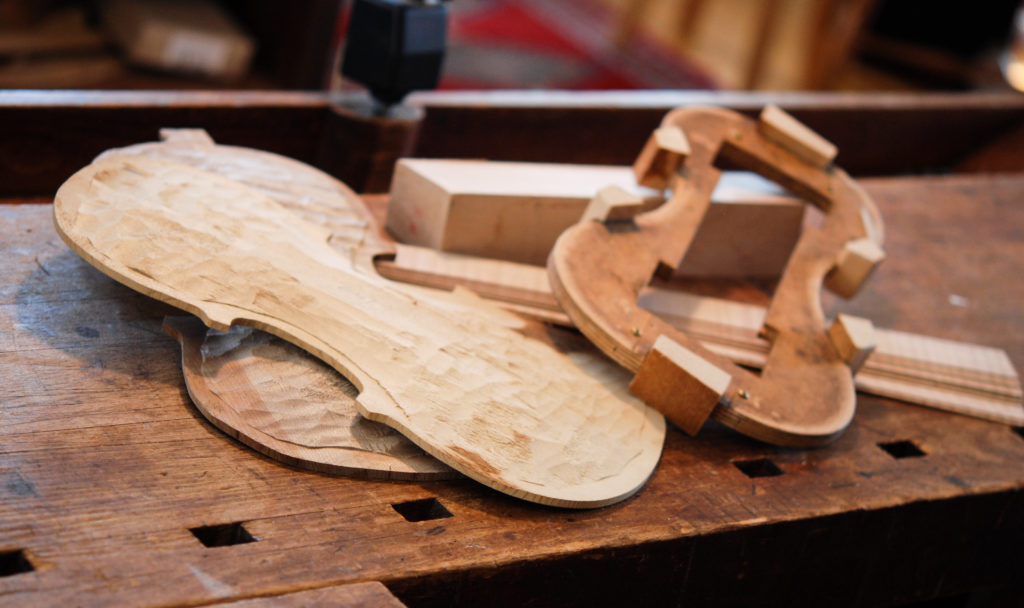 I probably worked on about 20 instruments from the JB (Jean Baptiste) Vuillaume shop, which was active in Paris from about 1840-1870. This was a very prolific shop; Vuillaume had a lot of makers working for him and was producing instruments on a number of different levels.

One of the reasons I worked on instruments at Brad Taylor’s was that they were not doing what the market wanted them to do—and which they may or may not ever have done. Violin dealers often do this: You buy something that you think you can improve, you hire some young person at a low rate to work on the instrument and see if they can get more out of it, and then you sell it for a higher price.

Working on so many of those instruments gave me the opportunity to understand that in violin making, doing things pretty consistently leads to a range of results. So conversely, if you’re trying to maximize the chance of good results, there should be differences from instrument to instrument. 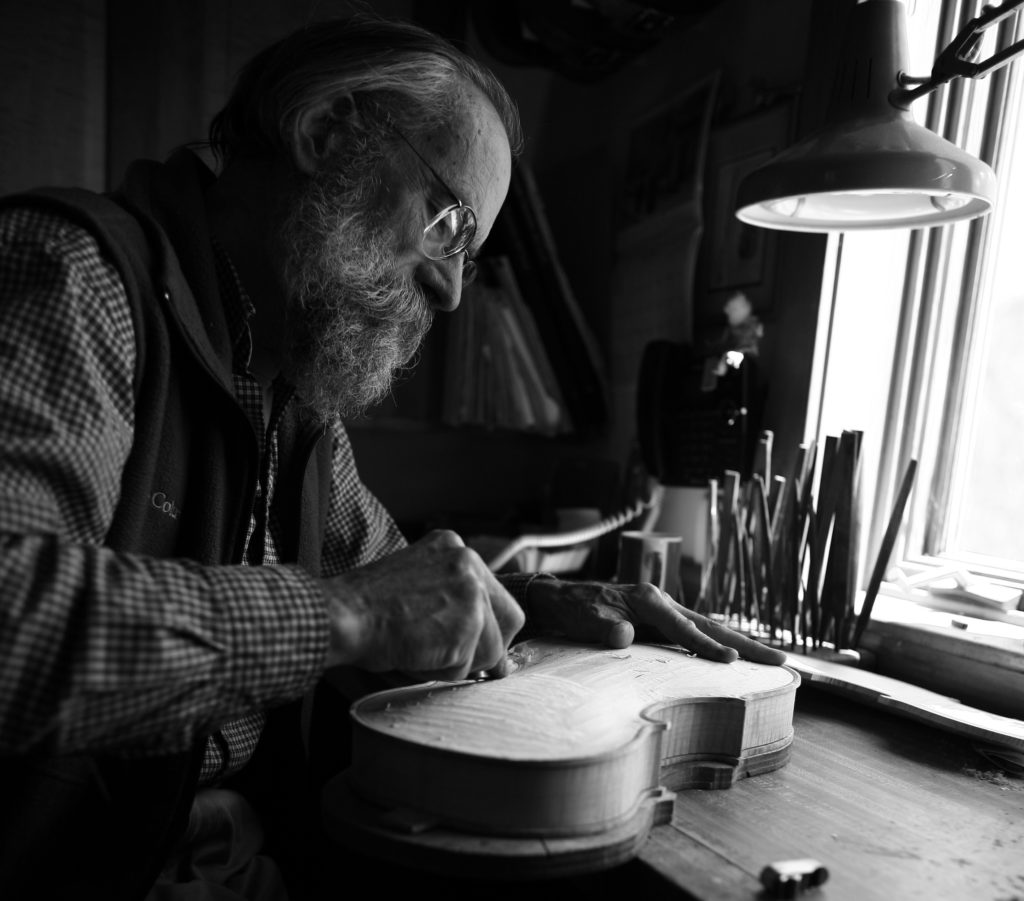 So I spent a great deal of time finding ways to improve instruments, learning what works, and finding the balance that results in a quality individual instrument. And when I started making instruments instead of just repairing them, I began by combining what I’d been taught about violin making with what I had learned in the shop about finding that balance.

But as I made instruments, I discovered that there were limits there, that I wasn’t getting the results that I wanted. And at the same time, I had an interest in exploring American wood. So that just naturally opened up the question for me of, what happens when we use a different wood, how do we figure out what to do with it? So I set about experimenting. Instead of using just the wood that works according to the rules, I learned to adapt the rules to work with the wood.

Over the years, I have continued using and experimenting with a variety of woods in making different instruments, and I especially enjoy the challenge of adapting my process to get the best result with each different kind of wood. This approach of finding the balance rather than following the rules has opened up my thinking and inspires me daily in my work.