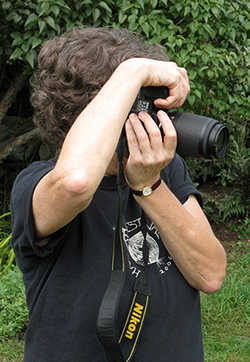 I began working as Doug’s business manager on January 2, 2008—the exact moment that the bottom fell out of the violin market. The financial meltdown of 2007-2008 was well underway. What had been a vaguely predictable pace of business evaporated, and during the eleven years that I was there, it never really was restored.

I had expected to be doing all the things I already knew how to do: data management, bookkeeping, inventory and supplies, client and prospect communication, graphics and website, etc. I had no idea how steep the learning curve was going to be. Doug had been pondering all sorts of project that he was interested in pursuing and for which he needed some technical assistance: acoustics testing, photography, research, technology. That first year, they all came bubbling up. Was I tired!

In addition to learning a lot more about string instruments, string players (and their parents), acoustics, and human nature, I had the privilege of observing a master craftsman at work and the pleasure of spending time with a unique and delightful person.

What I thought would be an easy, potentially repetitive, perhaps slightly boring job became an endless source of fascination. Every day was different and unpredictable. Some of that was due to the effects of the Great Recession, but a lot of it was in the daily surprises of working with Doug. You would not think so—he keeps on doing what he does so well—but I never knew what each day would bring.

One of the best parts of my experience as Doug’s business manager was the contact with all the people I talked to, some of whom I met in person. The clients, the prospects, the local players, the teachers, family members of clients, the dealers. What a mix! What interesting people! My life was constantly enriched by the connection to such a diverse demographic.

I retired officially on December 31, 2018, though I was on a retirement-glide path for all of that year and most of the previous year. Since then, I have been playing a lot more fiddle. I’m involved in a new project celebrating the great fiddling tradition in Vermont: www.fiddlersonthegreenvt.com. I have been able to take my time doing the mindless tasks of life. It’s great to be able to choose. With a sense of panic, I find myself thinking, “I don’t have anything to do!” And then I realize that I DO have things to do, and I can decide which of them I want to do and which ones I don’t. It’s a great feeling.

I am so grateful to Doug and Lisa for those eleven great years. This job put the crown on what has been a unique career; I haven’t had a ’normal’ job in almost 50 years.