I first started working with Aaron Mossburg in 2012 when he was studying with Peter Slowik. Aaron needed a high quality instrument for his undergraduate studies and purchased opus 583, a 16 5/8” viola built in 2006 on an original model. In the summer of 2019, Aaron—having completed a Master’s at the Cleveland Institute of Music—returned to us, needing something different out of his instrument to carry him into a professional career.

We discussed possible adjustments to opus 583, but I had just finished setting up opus 986, a 16 5/8” viola modeled after the work of Gaspar da Salo, and thought it fit his needs and his more mature playing. There was a strong immediate connection between Aaron and the viola, and he decided to trade in his original purchase for this newer instrument.

Two months later, he played on opus 986 in his audition for the principal chair with the Rochester Philharmonic and won the position. This is one of the most satisfying things for me as a builder—finding the right fit that allows a player to develop and fulfill their dreams—so we caught up with Aaron for a discussion about his new role. 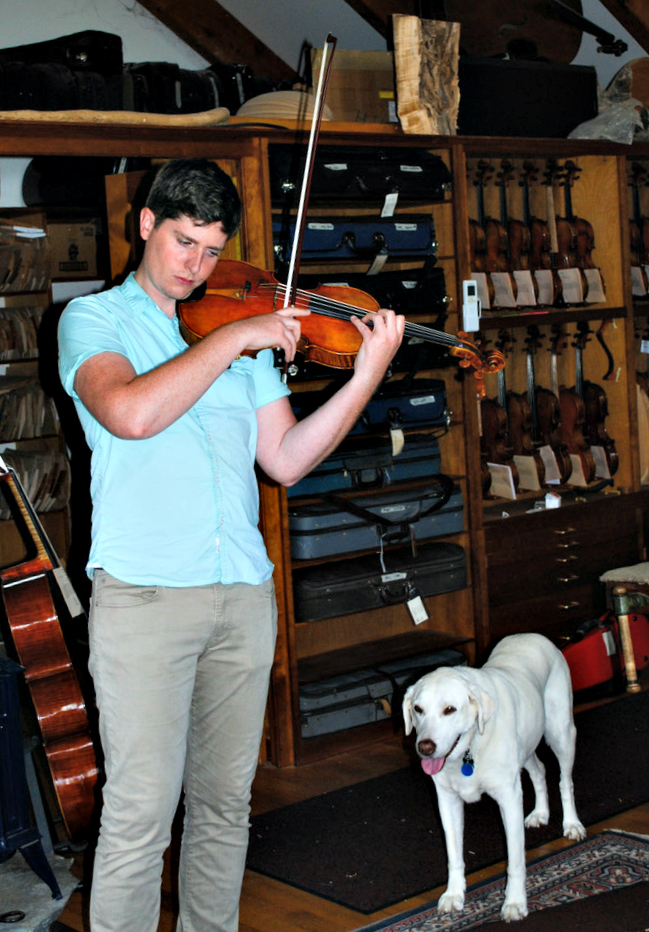 Has being an orchestral musician always been your goal?

Ever since I can remember. I started on violin and then switched to viola in high school, which is when my teacher, Peter Slowik, first put me in touch with Doug Cox.

Having had that goal for so long, it must feel good to be the principal in a respected orchestra.

It’s been a pleasure. Interestingly, I don’t know if I ever had the goal of wanting to become principal. After I graduated from Cleveland, I felt I would be happy to do anything with an orchestra, to be able to live the dream in whatever way possible. I was open to whatever came my way and felt fortunate to win the audition for a one-year position in Pittsburgh. Prior to that, I had been principal in most of the orchestras I’d played in, so I thought I would put that experience to use and take some principal auditions.

How do you feel your role is different as principal?

As principal I think it’s important to really bring everyone together, it’s important to be inspiring, it’s important to be not just a leader but a convincing leader, someone that people want to play alongside with. Those are the main responsibilities, and then finding ways not just to set the bar higher for yourself but also for those around you by coming in prepared. You also want to unify the section as much as you can so it sounds like one viola.

How has it been coming into an established orchestra as a younger player and assuming a leadership role?

It was definitely a transition at first, going from being a student and coming into the real world and stepping into that leadership position. Rochester has a very unique situation where the former viola principal decided to step back into the section, so that’s a unique dynamic. They have been very gracious, and things seem to be going quite well through it all. Rochester is a very established orchestra with a rich history, having solidified their identity by working with amazing musicians and conductors over the years. As a new member of the orchestra, I’m trying to find the balance between being receptive to the dynamic of what has been established and bringing my identity and a fresh perspective to the table.

You recently swapped out instruments and I’m wondering about that transition. What was limiting you in the old instrument? What is different for you with this new viola?

Ever since I started viola, I listen for certain things and try to bring certain sounds out of the instrument. The first Doug Cox instrument I played on was very good for me, especially for the time in which I played on it. I played on it all through undergrad and through my years in Cleveland for my Master’s degree.

Around the time I started playing with top tier orchestras, I got to a point where I was feeling some specific sounds were harder to produce. I tried different strings. I tried getting my bow rehaired more frequently. Eventually I decided to go to Doug for a sound adjustment to see if there was something he could do. When I went to his shop, I gave him a long list of the specific things I was looking for and he said, ‘well, actually, I just finished a viola that I think would fit you very well.” I played the instrument and immediately fell in love with it and felt, yeah, this is what I’ve been missing for the last year or two.

The timing worked out really well. My contract in Pittsburgh had just ended and I had two months before the principal auditions for Rochester to get acquainted with a new instrument. The measurements of the two instruments were very similar, so it was a smooth transition. The new viola has a more direct voice and a bit more power, which I think helped win me the chair.

We wish Aaron and opus 986 many years of good music together.